This post is a sidebar conversation and may be removed.

Is efficiency a virtue?

During her grad studies, my wife picked up the saying Efficiency is not a virtue. from one of her profs (I don't know if he is actually a Professor, but I'll presume for now).

To me, it seemed to make some intuitive sense in that there are times when it is clear that efficiency is not a virtue. But when I started to actually consider it, and the idea fell apart, like most slogans do. A few days ago we had a conversation about it, and I voiced my growing disagreement with it, leading to a conversation that she had on Mark Zuckerberg's panopticon (itself a grotesque example of the vicious application of efficiency). Here's the gist of the convo: 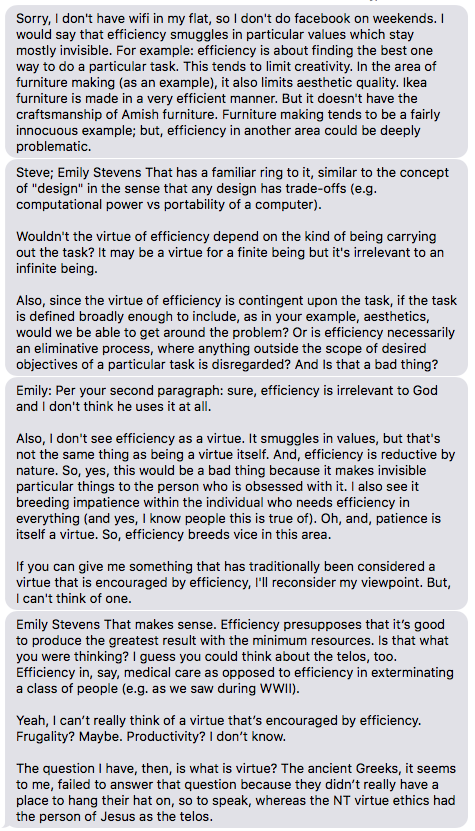 For a clear-cut example of efficiency used for evil, think about the Trump/Sessions policy of kidnapping asylum-seeking children at the southern US border. This is an devastatingly efficient way to destroy individual lives, families, and communities.

Another example of virtuous efficiency: bicycles are among the most fuel-efficient machines humans have ever created. The charity World Bicycle Relief uses this efficiency to provide transportation to people living in rural regions of developing countries meaning that people now can transport their goods to previously inaccessible markets, children can ride their bikes to previously inaccessible schools, and the cycle of poverty is interrupted.

…AAAAaaaaand finally about efficiency limiting creativity. I completely disagree. Not only does every lazy person find the most efficient way of doing something, they are often very creative in how they do so. Further, the need to find sources of fuel more efficient (and clean) than burning coal has led to significant advances in solar, wind, and tidal power generation. All applications of creativity driven by efficiency.

Conclusion 1: it is true that efficiency is sometimes used for evil.

Conclusion 2: it is true that efficiency is sometimes used for good.

Conclusion 3: it is not true that efficiency is never a virtue.